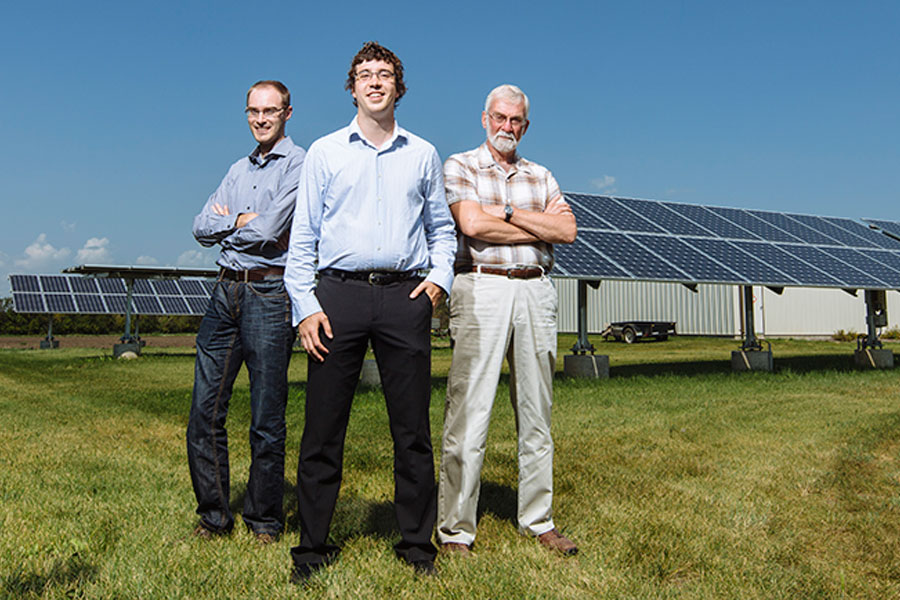 "Using the land for your survival but also protecting it and living as one with nature are core beliefs I share through my mother and grandfather's Métis ancestors," said Boutin, now a University of Saskatchewan chemistry PhD student.

Boutin has been awarded a $20,000 Queen Elizabeth II Centennial Aboriginal Scholarship from the Saskatchewan government to research how solar cells can be more efficient and long-lasting using new low-cost materials. His results were published last year in the Journal of Physical Chemistry Letters.

"Boutin's results can guide the synthesis of the next generation of new materials used for solar cells," said chemistry professor Ronald Steer, Boutin's co-supervisor. "This research is part of a worldwide effort to replace methods of generating electricity from fossil fuels."

Boutin does experiments on a new carbon-based material, developed at the University of Melbourne in Australia, that holds promise to improve photovoltaics, the conversion of solar power into energy.

The current challenge with solar panels is that they do not absorb all of the light that reaches them. Even the best silicon solar cells ever certified have a 25 per cent efficiency and huge amounts of energy are lost.

"While most people focus on solar device engineering, Philip is looking at novel ways to harvest the wavelengths of sunlight that would ordinarily be wasted," said Timothy Kelly, Canada Research Chair in Photovoltaics and co-supervisor of Boutin.

Most of the sun's rays reach Earth as infrared light, undetectable by normal solar cells.

Boutin is trying to capture these infrared rays. He has bombarded the new material—a thin plastic film—with a laser to simulate the effects of infrared sunlight.

He has shown that the new material can convert these "stealth" rays into visible light, making them detectable by solar cells. The material would be placed inside or behind solar cells to produce more electrical energy.

Unlike current cells, which are made of silicon, these carbon-based cells are very cheap to produce, flexible and can be used to create solar-cell textiles.

"The MGM Grand hotel in Las Vegas uses solar-powered blinds made of a material similar to this. The hotel is meeting part of its electrical needs with it," he said.

He thinks his work could benefit isolated northern Aboriginal communities which can't always count on reliable electricity in winter.

"When a power outage occurs, technicians can reach those areas only by plane," said Boutin. "Better solar cells would help communities become self-sustainable."