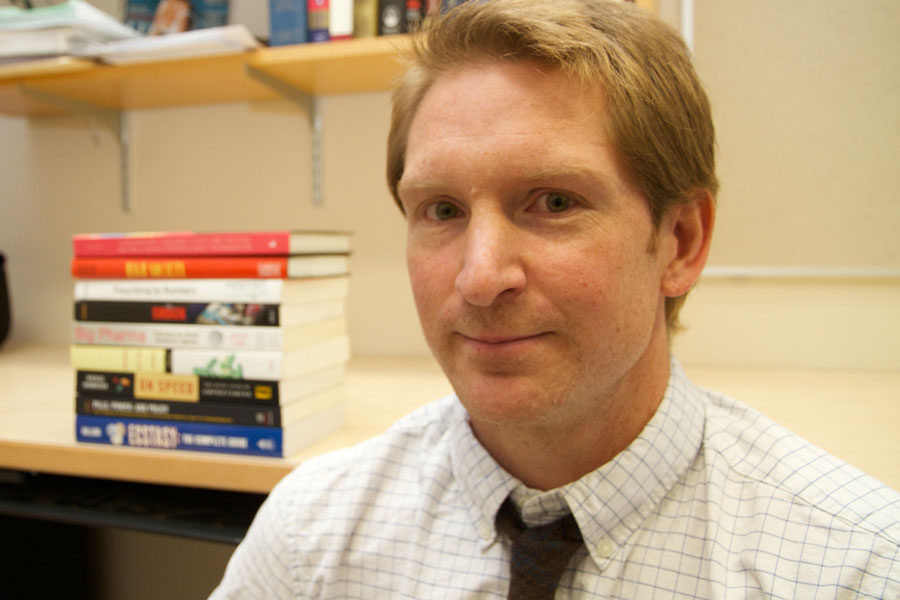 "Alcohol is a great example of the public back and forth on drug use in society," said Richert, who joined the U of S as a post doc in 2011 before becoming a lecturer in 2014.

The prohibition of booze in the early twentieth century reflected the public's perception that alcohol had a negative impact on health and morality. That is a perception that has changed back and forth and back again. And in a more recent turn of events, it now appears that society has also changed its mind about marijuana, moving it from being an illegal substance to one that is readily prescribed and even legal in some places.

"There is a delicate line between recreational drugs and pharmaceutical products," he explained. "I want to understand what that line means and how that line is constructed."

Richert hopes his work can help inform the public, because the legal-illegal line is becoming more blurred everyday. "Now more than ever—with multiple doping scandals in sports and morphine use in right-to-die cases—the public has a need for information on drugs and society."

What's determined legal and illegal, and how public access and consumption is determined, is "a complex interaction between health advocacy groups, politicians, scholars and the medical profession," Richert said. "A big part of my research is about trying to understand the negotiation between these parties. How do you create evidence-based policy on drugs if you don't understand that negotiation?"

Naturally, political, economic and health considerations play into the decisions in setting boundaries around the access and legality of these substances, but public sentiment also casts a long shadow across these negotiations as well.

"How do citizens react to a so-called nanny or daddy state and how that infringes on our rights? It's a balancing act between politicians, health imperatives of consumer protection and preserving our choices in the market place."

An example of this that Richert cited is a case currently being disputed in the Supreme Court of Canada on the topic of assisted suicide and the role of opioids—drugs derived from opium poppies like morphine or heroin—in palliative care or hospices. "They will have the chance to clarify the difference between euthanasia and potentially life-shortening use of opioids."

But there is also question of consumer choice regarding which opioid to use.

"There has been debate over use of heroin and morphine. Some interest groups in the U.S. and Canada have advocated for legalized use of heroin in hospices because they viewed it as more effective in lessening pain than morphine. But there is also a (negative) perception of heroin."

Rightly or wrongly, this is another great example of the ebb and flow, Richert said. "Heroin has been widely available in hospices in the U.K., Australia and elsewhere, which is something not a lot of people understand."

The battle between morphine and heroin is a complex one, but what's blurring the line between recreational drugs and pharmaceutical products even more is the rise in prescription drug abuse and related deaths. Richert pointed to the 2012 Canadian Alcohol and Drug Use Monitoring Survey, which revealed that around 410,000 Canadians reported abusing prescriptions drugs including Demerol, Ritalin or Valium.

"These (drugs) are a serious danger and quite frankly Stephen Harper bungled his national drug strategy in 2007 by failing to incorporate pharmaceutical use. This ignores the relationship between legitimate pharmaceutical drugs and recreational use. Some have suggested this happened because of big pharmaceutical dollars."

Harper's drug strategy has since been modified by Health Canada to address an alarming upward trend of prescription drug related deaths in Canada, Richert explained, adding that this is an important recognition of the changing profile of a drug user.

"There is a reconfiguring notion of what a drug user or abuser is. Is it a junkie on the street, a medical student taking Ritalin to study better, or a housewife taking Valium? Mother's Little Helper as the Rolling Stones used to say."