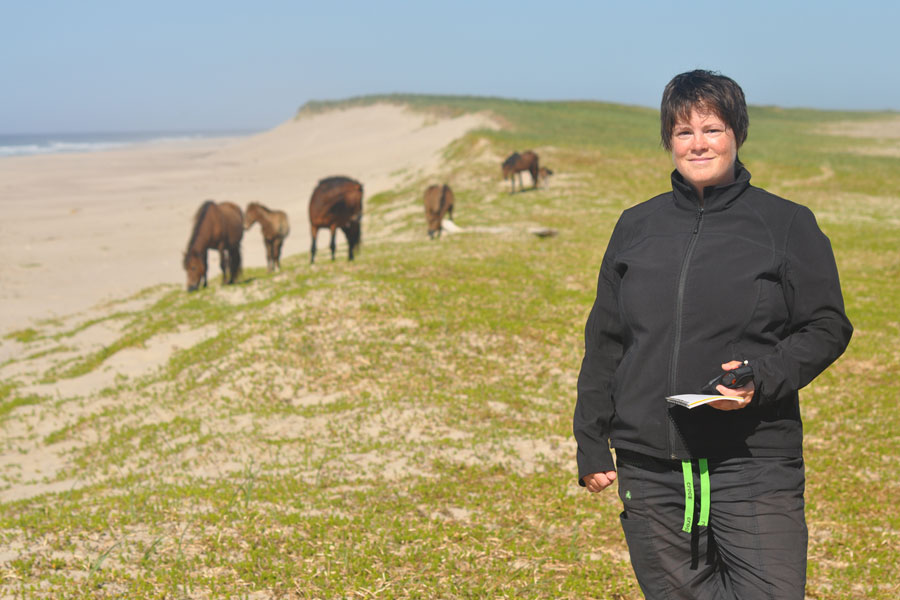 For the past three summers, she has been part of a University of Saskatchewan research team studying the more than 500 wild horses of Sable Island, a beautiful but remote Nova Scotian island declared a National Park Reserve last year.

The unique herd, legally protected since the 1960s, has been living freely on the windswept sandy island since the mid-1700s when it's believed they were seized from Acadians by the British and relocated to the island.

"The horses are iconic symbols of the island, and to many Canadians Sable Island is a surreal and inaccessible destination," said Medill, who has privileged access to the reserve as a researcher.

Medill is one of five U of S students currently on the island studying the horses. The long-term project, led by U of S biology professor Philip McLoughlin, is funded by the federal agency NSERC, the Canada Foundation for Innovation, and the L. David Dubé and Heather Ryan Veterinary Health and Research Fund.

The goal is to understand the population trends, social behaviours, inbreeding and genetics behind disease resistance in Sable Island horses. The research could help shape Parks Canada's decisions on how to manage the horses.

"The research program also has potential to become world-renowned for answering long-standing questions in ecology and evolution," said Medill. "Many management decisions of feral horses around the world have been dictated by public pressures and not necessarily by sound science."

Accessible almost exclusively by air, Sable Island is a one-of-a-kind wilderness lab, offering an isolated population to learn how mammal evolution works. It's one of the few feral horse populations in the world that has never received veterinary care or been managed to restrict population size.

To understand the role played by gut microbes in the horses' genetic lineage and health, the team collects fecal samples.

"This is the first assessment of patterns of antimicrobial resistance for an isolated, benchmark population of horses for which no member has ever been administered drugs," said McLoughlin.

Every day, Medill walks 10 to 15 kilometers on the island gathering data on the horses. So as not to disturb them, she takes detailed photographs of the horses' identifying markings, scars and wrinkle or whisker patterns.

Her goal is to study the herd's social organization and the stress on the bands measured by the level of the hormone cortisol. She is investigating how social interactions change based on the number of males and females and how their births and deaths fluctuate accordingly.

The horses have a unique social system of bands with a dominant leader—similar to complex primate systems—and can serve as a model for learning about animal populations more difficult to study, such as the mountain gorillas of central Africa.

"The horses are what keep me going," said Medill. "I am fascinated by their social movements and each year can't wait to see who is still there, who moved where, which males have finally achieved band status, and which have been displaced."

An island battered by Atlantic winds and waves can be a challenging place to spend weeks at a time doing research.

"It helps immensely to be passionate about your research," she said. "I'm living my dream of combining my education with my passions for both horses and the wilderness."