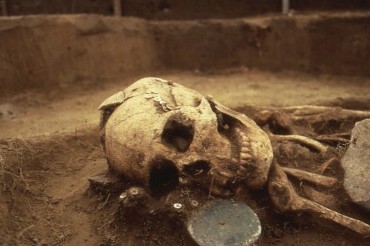 "I've conducted research with the Baikal-Hokkaido Archaeology Project since the late 90s, and this specimen really intrigued me," said Lieverse, associate professor at the University of Saskatchewan. "I've known about this skull for about 10 years and there are a couple things about it that are fascinating."

The first, she said, is that this individual is missing the two front teeth on the lower jaw. And the second is that there is an obvious stone projectile tip embedded in the exact same spot of the mandible where the two incisors should be.

"We knew there was a projectile, we could see it, but we didn't know if it occurred years before the individual died or if it happened around the same time as his death," she added. "I suspected it happened earlier and had something to do with the very unusual missing teeth."

The specimen was found in a marked cemetery northwest of Lake Baikal. The skeleton was buried ceremoniously with a nephrite disk and four arrowheads, one of which was broken and found in the eye socket.

After radiocarbon dating and analysis, it was determined the individual was a 35-40 year-old male from the early Bronze Age, about 4420-3995 BP (Before Present).

With permission from a Russian colleague, Lieverse traveled to Siberia and returned to the Saskatoon synchrotron to examine a specimen that contained secrets and surprises.

The Biomedical and Imaging Therapy (BMIT) beamline at the CLS is a unique facility where specimens such as this can be examined using powerful X-ray light.

"We discovered that the missing teeth had nothing to do with the projectile," said Lieverse. "Turns out that this individual had a rare case of agenesis – where the two central incisors never formed – a genetic trait that affects less than half of a per cent of all people."

This is one of the only examples in the archaeological literature of the occurrence of this kind of genetic dental anomaly.

The projectile tip, it turned out, was in fact a broken piece of the arrowhead that was placed in the eye socket. Lieverse suspects that the arrowhead was removed from the man's face, either during the struggle or before the burial.

"We know that the people of the Baikal region had a very little history of violence.  This is one of only three specimens dating to this period that have any evidence of violence at all.

"A projectile point fired into somebody's face is probably not an accident. You can say with some certainty there is an intention of violence there."

For photos to accompany this story and more images, visit the CLS Flickr gallery