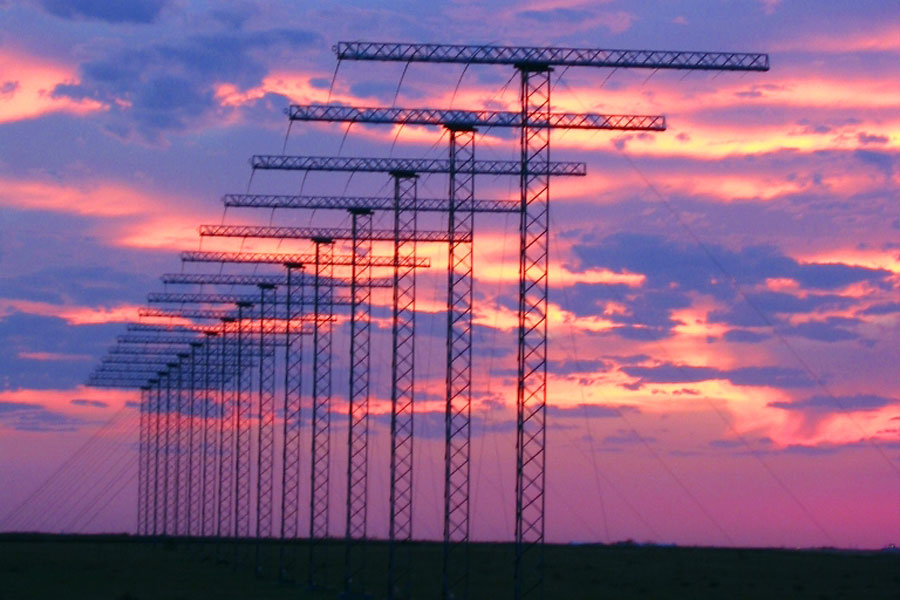 "Down here on Earth, weather is driven by high and low pressure systems, while high and low voltage systems from space drive electrically charged 'ion winds' in the ionosphere," explains U of S space scientist Kathryn McWilliams, an associate professor of physics and engineering physics.

While weather patterns on the ground are understood well enough to accurately predict weather a few days in advance, she said space weather prediction is still in its infancy.

"We're still in the early stages, but our goal and the goal of our colleagues around the world is that SuperDARN's research data will one day be used much as meteorological data is used on Earth," McWilliams said. "We hope SuperDARN will be used by industries and governments to help mitigate negative effects on Earth from space weather, including damage to a satellite or technology on the ground."

SuperDARN is the Super Dual Auroral Radar Network, a global collaboration among research institutions in 10 countries around the world operating more than 30 scientific radar installations. McWilliams co-leads the Canadian arm of SuperDARN with Canada Research Chair Jean-Pierre St. Maurice through the U of S Institute for Space and Atmospheric Science. SuperDARN Canada includes three radars installations in the Arctic, one in northern British Columbia, and one just east of Saskatoon.

The effects of stormy space weather can be profound, disrupting international banking, Internet, television and other communications, or even global air, land and marine navigation systems, all of which rely on satellites in space. Effects reach right to the ground, where they can cause huge spikes in current in power grids, one of which caused the entire province of Quebec to go dark in 1989. Solar storms can also throw off GPS accuracy by several metres by disrupting the signals from the satellites on which the system depends. As industries from farming to mining begin to incorporate GPS automated systems, such inaccuracies could cause dangerous and costly collisions or other accidents.

The most visible and striking manifestation of space weather is the aurora, the shimmering sheets of green and pink that light the northern and southern skies. McWilliams said Canada is uniquely suited for space weather research, as it has the largest land mass located under the northern "auroral oval," the region around the North Pole where the aurora most often occurs.

McWilliams explains that SuperDARN produces "voltage maps," taken every minute on a global scale, that track the motion of charged particles in the upper atmosphere as they are pushed around by the forces imposed from space by the solar wind.

"These maps are similar to the weather maps that we see on the evening news," she said.

SuperDARN Canada recently received good news from the Canada Foundation for Innovation, in the form of $462,000 in funding to continue supporting the country's contributions to the international effort. The funds will ensure SuperDARN Canada works at full capacity, driving development of new technology and increasing access to data.