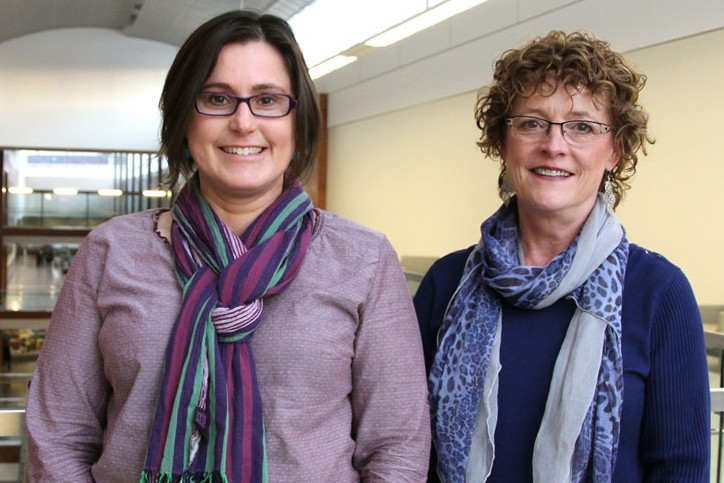 One of those concerned at the possibility was Lynn Kuffner, manager of Student Health Services, particularly after she saw the results of a recent student health survey.

"The survey revealed that our students weren't hitting the mark when it comes to eating five to 10 servings of fruit and vegetables per day," explained Kuffner. "We want to know if this is choice or necessity; is it a choice or a matter of money?"

In her search for more answers, Kuffner took the survey results to the Department of Community Health and Epidemiology and met Rachel Engler-Stringer, an assistant professor with a background in food security and nutritional inequality.

"It piqued my interest," said Engler-Stringer, who proposed a more comprehensive look at the issue. "There have been a couple studies in the U.S. that have revealed a high prevalence of food insecurity in student populations, but nothing in Canada has been done looking at an entire student body."

In a Queen's University study, Engler-Stringer continued, in-depth interviews were conducted with students who frequented the food bank and that study revealed "significant hidden food insecurity. People only go to food banks out of desperation and Queen's is seen as a privileged university. We want to know what the situation is at the U of S."

The U of S survey, which will be sent to 4,500 randomly selected students at the end of February, will examine four elements of food security: quantity; nutritional quality; access to food that maintains human dignity; and food that is culturally accepted.

"We're hoping to use the data to help improve food security on campus," said Engler-Stringer. "Some universities have food charters and by policy have fruit, vegetables and protein sources at reasonable prices. Marquis Hall does a good job, but lunch is still $10. I don't know too many students who can afford that everyday."

Another issue facing the campus, she explained, is that the city neighbourhood around the main campus is "kind of a food desert. It lacks close geographic access to a wide range of healthy food."

Consider a student who does not have a car and has a limited budget for monthly groceries. "That student probably goes to the closest grocery store, which isn't that close, and buys nonperishable items to limit the number of trips," she said. "Vegetables and fruit are more expensive than Kraft Dinner."

And the effects of food insecurity are significant, said Kuffner. "This matters on so many levels. It is about social justice; no one wants young people to be hungry. You can't study well if you haven't eaten, and if you haven't studied then you aren't doing well academically."

Lack of nutrition is linked to various health and social problems across the lifespan, added Engler-Stringer. "Being a student struggling with this is not conducive to a good student experience. They are aspiring to fulfill important roles in society and we need to support them."

The U of S survey is the first step, and initial results will likely be available this summer, Engler-Stringer said. Other Canadian universities, including Acadia University, Queen's and the University of Alberta, plan to follow the U of S lead and survey their students. "We are testing the waters and will share our lessons learned with those universities."

Kuffner said that getting a full view of the food insecurity picture will help determine if current services on campus— including a food bank, fruit and vegetable markets and cooking classes—can adequately support students who are food insecure or if more support is required.

If the issue cannot be solved with current resources, Engler- Stringer said, "the question becomes how do we make being a student more affordable."

U of S College of Medicine granted full accreditation